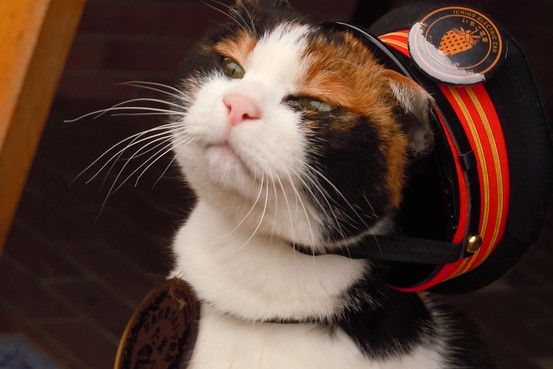 Japan’s rapidly aging workforce may be able to draw some encouragement from a cat that continues to attract tourists from around Asia in her role as station master at a small train station—despite advancing years.

Tama, who turns 15 in April, continues to attract tens of thousands of tourists each year after seven years on the job at the Kishi station in Wakayama, western Japan. Her appointment helped to turn around a rural area that had been hit, like many parts of Japan, by a declining population.

Tama’s work is not exactly demanding, consisting mostly of sitting around having her picture taken with tourists.

The station – and Tama of course — attracts tourists mainly from Hong Kong and Taiwan, with the number of visitors from those two countries having surged 240% in the six months ending in September, according to the Wakayama Electric Railway. The company operates one line with about 2.2 million passengers annually.

In all, some 20,000 tourists from Asia visit the small town annually and officials say the recent Lunar New Year holiday season may prove to have been an even bigger hit with hundreds of tourists visiting on many days.

“The idea is clever, as the cat has become the symbol of the railway, attracting many tourists,” said Ka Wing Wu, a 22-year- old college student who came from Hong Kong with his friend to see Tama.

From her initial appointment in January 2007, Tama has been on the fast track for promotion, being named a deputy president in 2013. Not surprising given the key role she has played in attracting tourists and helping to rescue a rail line that was sinking deeper into the red annually as passenger figures fell every year.

In 2008, Tama was given a special award by the prefectural governor for providing an estimated Y1.1 billion ($10.8 million) boost to the region. “Tama has stimulated the region and I’m happy to see many tourists leaving in smiles after watching her,” said Maki Miyashita, a company staffer.

Company president Mitsunobu Kojima, described as a dog lover, claims credit for the hire. He says the idea came to him when he first set eyes on Tama, particularly since it would save money. Similar to many rural rail operations in Japan, Wakayama Railway now has no staff at many of its stations.

But like many of a certain age, Tama appears ready to take it easy. She works only four days each week with a “junior station master,” a three-year-old calico named Nitama, filling in.

But the substitution has not put off visitors.

“The cat is so cute,” said a young woman visitor.